This post is part of a series featuring individual members of the international, interdisciplinary editorial board of the Journal of L.M. Montgomery Studies. 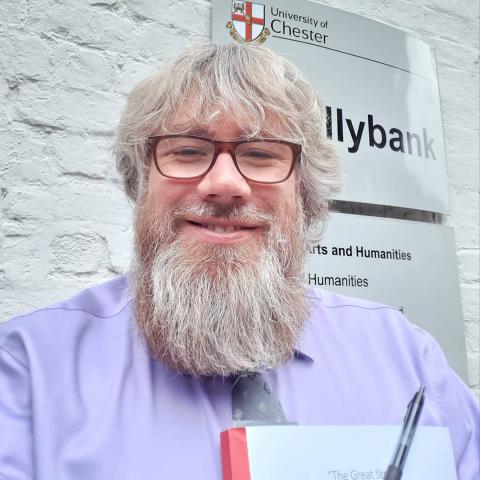 Brenton Dickieson (MCS, Regent College; PhD, University of Chester) is a writer, researcher, Maudcast host and teacher originally from New Glasgow, Prince Edward Island. He grew up playing in L.M. Montgomery's Cavendish backyards, but did not really discover her books until adulthood. He teaches literature and spirituality at a number of universities, and has been teaching at UPEI since 2006. His research considers how the creation of storied worlds contributes to conversations about spirituality, theology, and cultural criticism. He was awarded the Elizabeth R. Epperly Award for Early Career Paper in 2020 for his article “Making Friends with the Darkness: L.M. Montgomery’s Popular Theodicy in Anne’s House of Dreams”. His popular blog, A Pilgrim in Narnia (www.aPilgrimInNarnia.com), explores the intersections of faith, fantasy, and fiction. Brenton is married to a superstar kindergarten teacher, Kerry, and they parent a red-headed teenager son, Nicolas, who is working to become a rock legend.

We asked the journal editorial board members some questions. Here are Dr. Brenton Dickieson's responses:

What is the best Montgomery quote?

Brenton: "The world isn't a vale of tears, Mrs. Taylor. It's a world of laughter" - Rainbow Valley.

Who is the best love interest?

Brenton: Rainbow Valley--either the real place the kids played in, or their imaginative version of it, or the park I played in growing up in Cavendish.

Who is your favourite kindred spirit?

Is there a food or drink in a Montgomery story you'd most like to try?

Brenton: The treats Susan Baker gives the boys returning home from war in Rilla of Ingleside.

Who is the best animal?

Brenton: Faith Meredith's Rooster, Adam, who was eaten by a parson.

Who is your favourite fictional Montgomery couple?

What is your favourite adaptation of a Montgomery work?

Who is the worst character?

Who is the most underrated character?

Brenton: Marilla. I thought the Anne with an E adaptation captured her awakening character well.

Which Montgomery text is most underrated?

Brenton: Emily of New Moon--loved by many, but known by few.

What do you think is the best, or worst, outfit?

Brenton: I must admit, I don't care much for puffed sleeves....

And some final questions:

What is the funniest Montgomery moment?

Brenton: Funny moments are partly affected by the Kevin Sullivan films, so as a child I liked the drunk Diana scene.

What is the wittiest line from Montgomery?

Brenton: “I'm so glad I live in a world where there are Octobers” from Anne of Green Gables.

Who is the mother-figure of the year?

Who is the father-figure of the year?

Brenton: Father Cassidy (a cheat; the fathers are not often strong).

What languages have you read Montgomery in?

Brenton: I have pretended to read it in Japan when I read there, but just a little school French and my well-worn English.

What was Montgomery's greatest accomplishment?

Brenton: Holding together the personal and cultural tensions of being a working minister's wife, mother, neighbour, and artist.